Three days ago, my friend Josephine put on Facebook this video about Merida from brave and her surprising make over change with the comment: "WTF?"

After a long chat together about "how and why" Disney Studio changed Merida's appearance from a strong independant teenage girl to a sexy mature fancy woman, before adding her among the other princesses, we agreed that it was stupid, insulting and more over, killing the label Disney, which could have shone with its first feminist princess.

But no, Disney still wants to mold the little gilrs of the world into this stigmatised idea : "To be famous and loved by everyone, you have to be sparkeling like customised ferrari".

Even more, we realized (Jo and me) that Merida wasn't the first princess with a developped personality, experiencing the same fate. It started (for real) with Belle from "Beauty and the Beast".
Instead of caring about her appearance, this girl was attracted to books, limitless knowledge and imagination, thanks to her little daddy. Remember her song:

"Madame Gaston?
His little wife,
No sir, not me
I garantee it (...)
I want adventure in the great wide somewhere,
I want it more than I can't tell.
And for once it might be great...
to have someone understand,
I want so much more that they've got planned"

Does it remind you of someone? Hum. In the french version, she ends with those lyrics:


"I want to fly in the deep of the space sky,
I want everything I don't have...
A friend who'd understand me...
and books for eternity,
far from all those people so noisy"


Even if the lyrics change a bit, the idea is here; as for me, she was the first geek princess of Disney history I managed to identify myself with: loves reading, don't care about following the "normal" path... She sacrificed herself to save her familly, she is generous and cares about everyone. But she also has her pride, knows what she wants, and she is not scared to yell at men.

Most of the time she is wearing a casual blue dress and I'm sure that most of the people when they think of her, remember that clothes... But no, for the princesses collection, they put her back in her peanuts butter sugar cream cake puffy dress that I always found ugly.

Honestly, the bottom part looks like a baroque column capital... 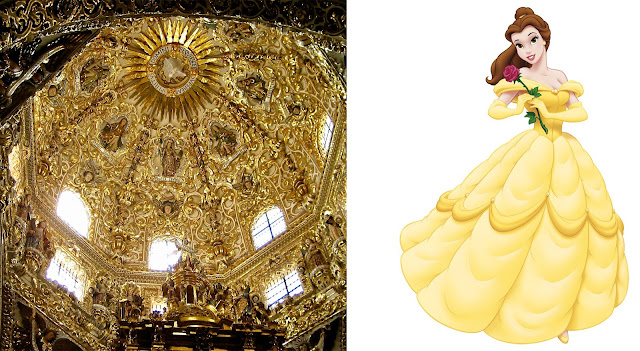 But it's true that her blue dress wasn't fancy enough... That makes 1 for the glitter, 0 for the moral.

After that comes different princesses or women characters that were much more independant.

First of all of them: Pocahontas. This one is great! She is supposed to marry the best warrior of her tribe but she prefers the white stranger. First cross-culture love relationship (1-2) that also permits whites and indians to understand each other (quite beautiful moral but so not true historically speaking). 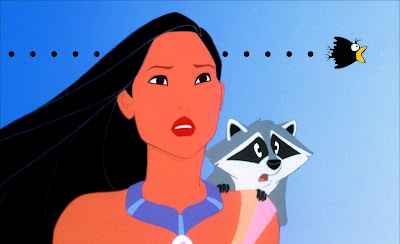 And the second episode? She is still waiting for him, goes to England to prove that she isn't a savage and for that purpose, has to wear an ugly puffy dress that is probably the worst in Disney Fashion design history. Good point, she takes off her wedding necklace to put another one instead (Fu** the tradition) and ends up to choose another white man, also named John but who is the one she was supposed to finish with (respect of the History, I like it). Bad point: she is saved by not one but two men, who litteraly fight each other like stags to win over the female... And, in this new story, she is shown weak, laking of energy and dependant not only of her new futur fiancy but also the ex one.

And for the princess collection, it's half-half: she is represented with her tribe clothes and her weding necklace, or with that ugly disneyish princess dress... I guess the two movies canceled each other so lets come back to our previous count: 1-0

Secondly comes Esmeralda... who fight against people crualty (1-1) annd... ends up happily marrying a man, that normally betrayed her in a the book and let her die (2-1). Wanna laugh? She isn't even present among the princesses collection at the end (3-1) 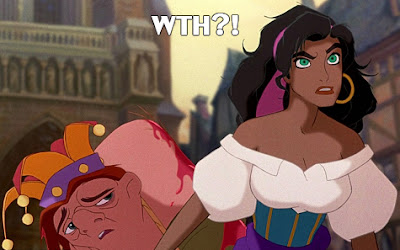 The next one is Mulan. She isn't a princess. She doesn't get a thing of being a woman in old China society (the movie is entirely made for that). As a woman, she sucks (litteraly) but as a warrior (with some training and bad advises), she actually gets success and aknowledgement. So it makes: 3 for the glitter and 2 for the moral.

Plus she saves the man's ass (twice), the emperor's neck and brings her male friends to dress like women. (3-3) 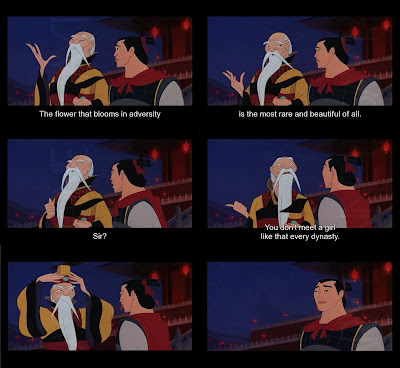 What about the princesses collection? Well... not only she dresses up with her bride clothes but it's also the dress that represents her the less. Especially when we know that the real Mulan never got married, refusing over and over again the Emperor's wedding proposal and ended up prefering killing herself better than being someone's wife. 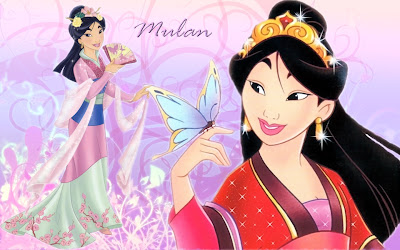 So it makes 5 for the glitter (this one hits pretty hard) against 3 for the moral.

I don't count Megara from "Hercules", (this movie entrely is an insult for me), Kusko (I know he is a guy but I could totally see him among the princesses) or Jane from "Tarzan" (I would rather say that Tok has more personality)... So let's go dirrectly to "Atlantis".


Kida (real name Kidagakash Nedakh) is a princess, a real one! She is independant and has her pride. Also, she becomes a f****g cristal of energy and just saves the day, at the end. Big 4 for the moral!

Even so, she needs to wait Mr. Milo to finally understand how to put a square cristal into a square hole, something, like a baby game, that she tried to do for 6 000 years and the young boy manage to do in 3 seconds...  (6-4) 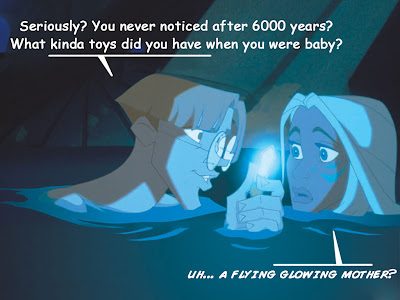 Worse and worse, she isn't among the princesses, while Mulan, who is not, stands out with her beautiful and sparkly bride dress. Logic! (7-4)

What's wrong with her? We don't know. Maybe she is too old and it's difficult to commercialise a woman who lives for 6000 thousand year and still looks young. Also there was no possibility to put her in a fancy cream cake dress. So wasn't it better to remove her completly?

In order to correct it, I redesigned Kida the way she should have looked like to be a real Disney Princess. 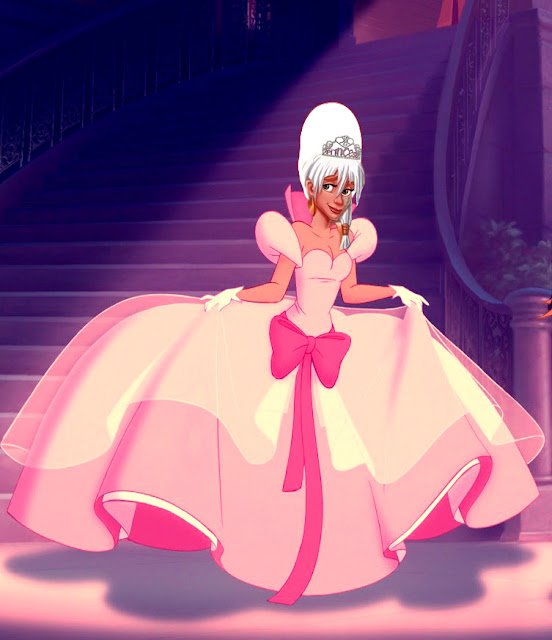 Ugly, isn't it? Even if I follow the same rules of the previous princesses, better, in fact, that she stays out of the collection. For her honnor.

After "Atlantis", Disney produced a series of film, that didn't really mark the public, except "Lilo and Stich" for its amazing trailers moking the previous Disney features, and "Brother Bear", because it's a beautiful story, but only with men (it change for a while). For the rest,  I'm pretty sure that if we think of Disney, people won't named : "Home on the Range", "Chicken Little", "Meet the Robinsons" or "Bolt". (Someone? Yeah that's what I though)

At least Disney tried to change their habits but unfortunately with not a big success. Therefore, the D. Studios came back to their orignial receipe: princess and songs. The "Princess and the Frog" was born. We have a beautiful character here. Tiana, independant woman who works hard to make her dream come true : owning her restaurant in New Orlean. Big deal, she is turns into a frog because she isn't a princess. 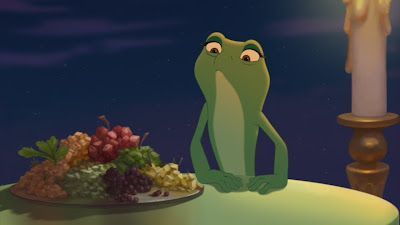 You could say, yeah, one for the moral because she has a big will and doens't let anyone stop her. But in the middle of the movie the witch Mama Hoodi makes us (not her) understand that what will make her really happy isn't her restaurant but love. In other terms: girl you don't understant, you can't be happy if you work all the time to reach your dream, but real happiness came with a husband... Ok so it makes 8-4.


In the end, she is shown with a big water lilly dress: so cute. Af course we don't count her friend who absolutly want to be a princess. So let's count: 9-4. 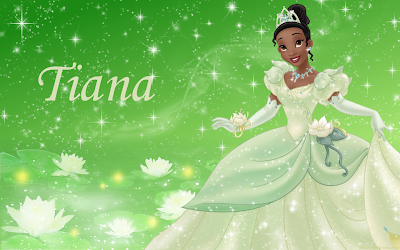 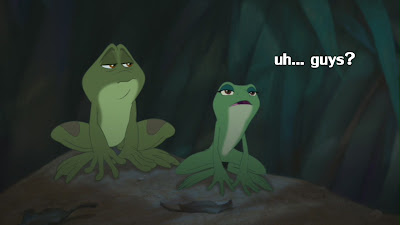 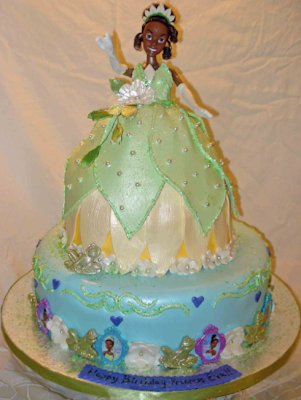 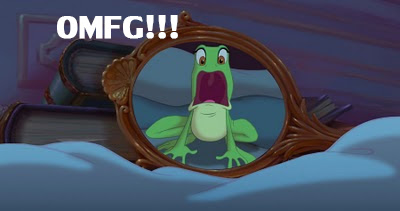 We also have "Tangled". Rapunzel is a real princess, naive, ignorant from life but super dangerous with frie pan. Make me laugh. She is 16 and the guys she fells in love with, is at least around his 25. Ouch for the message... But she saved his neck and is the one who proposed him. Cool. 9-5.

Unfortunately on the princesses collection, she is still designed with her long blond hair, normally representing metaphorically her captivity and malediction. So, little girls, it is good to identify yourself to a long blond girl sequestrated in a tower who cooked pies all days, than an independant and free short hair brunette who has guts and all. 10-5

This is soooooo her, isn't it guys? 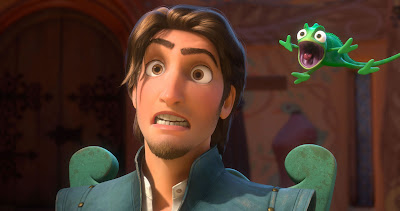 Right! And all this fuzz to finally arrive to Merida from "Brave". What can we say about it that hasn't already be said? Another attemp of changing... and another Disney failure in modernism. Like an old religion which doesn't understand that to not die they need to evolve. Well, their evolution turns into producing only 3D movies but not changing their mind and message... Because it's a receipe that produces money.... But not for so long. Superficially with no mining behind. I am not sure that it will run forever. Esecially nowadays.

The dinosaurs from Disney need to wake up soon. They already are an endangered species. They need to evolve radically and soon if they don't want to be mashed by the 21st century asteroid.

But for now, the glitter wins 11-5. You could even go to 12-5 because even if Merida was the first real feminist Disney character, the result with her makeover not only kills the point for the moral but doubles the power of commercial superficiality. 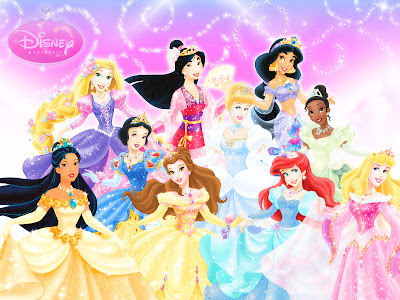